That’s the spirit: how sustainable are our favourite alcoholic beverages?

Many humans engage in the consumption of alcohol to alter their mental and emotional status. Other reasons for its consumption are stress reduction, self-medication (pain relief both physical and emotional) and to induce a sense of social confidence and ease in the company of others. But it might be surprising to see what an enormous impact alcohol production has on our environment.

The land required for growing the vast amounts of ingredients that go into these beverages (such as grains, hops and grapes) is huge and needs some number crunching. For example, the global vineyard surface area amounted to about 7.6 million hectares (Statista, 2017) which is equivalent to 76,000 square kilometres. Global barley yield per hectare is projected to be around 2.92 metric tons (FAO, 2014) and 1.3 metric tons of barley would yield 8,837 litres of beer (The Maltsters Association of Great Britain , n.d.) which means a hectare of barley crop would yield approximately 19,849 litres of beer. By assuming that barley is the crop used for both beer and spirits manufacturing and summing both results, in total 203.44 billion litres, would need 10249382 hectares of land (102493 square kilometres). Therefore the total amount of land needed to produce alcoholic beverages is approximately 178493 square kilometres which is almost the size of Cambodia.

This industry also consumes an enormous amount of water. The overall water footprint (farm to glass) of Czech and South African beer production is at 45 litres and 155 litres to every 1 litre of beer respectively (WWF , 2009) whereas for wine it stands at 843 litres for every 1 litre of wine (Bonamente, et al., 2015). So combining both waters consumed by the beer and the wine industry, we need approximately 30987 litres of water of which 9154 billion litres of water is for the beer industry and the rest, 21833 billion litres (21.83 km³) of water, for production of wine. It should be noted that the water required for beer production varies globally and we used Czech water numbers for calculating the water footprint since they were the smallest. This amount of water is equivalent to the total renewable water resources consumed by Tajikistan in 2011 which stands at 21.91 km³ (Wikipedia, 2014).

On top of that, as per the WHO report on Alcohol and Health 2014, problems related to the consumption of alcohol rank among the top five risk factors for disease, disability and human deaths throughout the world. There are three mechanisms of harm caused by alcohol consumption (WHO, 2014):

Some of the major diseases and injuries caused by alcohol consumption, according to the WHO (2014), include neuropsychiatric conditions, gastrointestinal diseases, cancers, intentional injuries, unintentional injuries, cardiovascular diseases, foetal alcohol syndrome and preterm birth complications, diabetes mellitus and infectious diseases (see Figure 1). For the year 2013-14 in England, the total cost to society of alcohol-related injury was predicted to be around £21bn and cost the NHS £3.5 billion  (Public Health England, 2014). 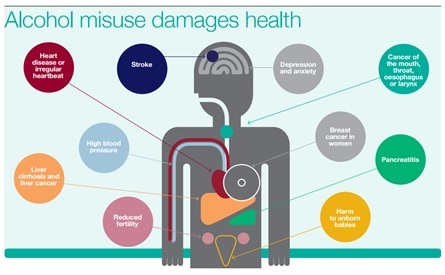 Based on the above analysis, we can see that alcohol consumption plays a huge role in terms of socialising and economic stimulation across the world. However, it also has a significant negative impact in terms of the vast land, water and energy resources it locks up and its impact on human health. It is up to society as a whole to decide whether alcohol is a worthwhile focus for so many of our valuable resources or whether these could be better invested elsewhere to support our ever growing global population.