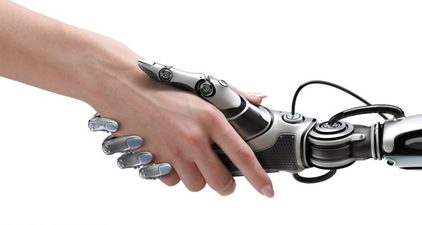 Is our fear of Robots Irrational? Three ways Robots can replace humans and three ways they can’t.
When people think about robots, their brain conjures up the image of a 6ft, walking and talking metal object with laser eyes– these are called humanoids and they aren’t the type typically found in industry. Since their introduction, they have been perceived as vicious pieces of technologies with a vendetta against humans. Whether the fear is in response to their appearance or their intelligence, people believe robots are ‘’taking over’’.
As pieces of programmable machinery, industrial robots can be efficient at many things. Their development over the years has been all for the purpose of serving humans and making lives easier. They are highly efficient when carrying out three types of tasks:
1. Predictable Work
Robots can take over predictable physical work, which includes repetitive, data based processes that can become tedious to human employees and often cause repetitive-movement injuries. Such processes include welding, chopping vegetables and assembly. Employing robots for these dreary jobs allow humans to move up the job-ladder and advance in their careers faster.
2. High Payloads
Robots have extremely high payloads. They are ideal in handling and processing large products, which if handled by humans can cause injury. For example, handling of car parts or packaging and palletising finished products.
3. Harmful Environments
Robots can work in hazardous and unfavourable environments. Let’s face it, humans do not want to work in -30°C temperatures or in dangerous chemical plants. The solution? Get a robot to do it and control them from the outside!
On the other hand, like any piece of machinery, industrial robots have limitations. These include a range of abilities only humans possess, ones robots will never be able to achieve. Humans are irreplaceable, especially in these three ways:
1. Problem Solving
Robots can be smart but they are only capable of so much; as in they can only solve problems which they have data for whereas humans can solve any problem with minimal data, especially in unfamiliar situations.
2. Optimal Flexibility
Humans are still considered the most flexible species, whether it’s their ability to interpret information, both old and new, or their physical reach. For example, once a robot is used to build the metallic body of a car, a human is still needed to complete the wiring within the small crevices.
3. Empathy
The third, and possibly most important human characteristic that robots can never possess is empathy. Naturally, humans are more expressive, they are caring, creative and vulnerable – emitting a sense of calmness to those surrounding them. Even the most intelligent robot cannot achieve this in certain jobs. For example, not all patients at the University of California’s hospital appreciate the Tug robot roaming the corridors delivering food trays and prescriptions. They were found to prefer the unique, expressive faces of the carers and nurses.
Not only are humans unique, often industrial processes are too complicated or variable for robots to handle. It was found that whilst 78% of predictable physical jobs are fully automatable, only 25% of unpredictable physical jobs are fully automatable. Therefore, a large majority of industrial processes remain in the capable hands of humans.
In our distinctive rule-based world, robots were given rules. Dubbed The Three Laws of Robotics, they were set by the creator of Robots, Isaac Asimov in 1942. They are:
1. A robot may not injure a human being or, through inaction, allow a human being to come to harm.
2. A robot must obey the order given to it by human beings except where such orders would conflict with the First Law.
3. A robot must protect its own existence as long as such protection does not conflict with the First or Second Laws.
These laws apply to every robot ever created, whether it’s the little robot worming its way around feet to vacuum your carpets or the 54kg industrial robot cutting marshmallows at Boomf’s factory in London.
It is appropriate to assume that combining human skills along with robot efficiency creates an unbeatable collaboration. Factories enlisting both robots and human employees find a higher production rate, reduced errors and waste, as well as higher quality products. In the near future, robots will become the norm in many industries and in everyday lives. So, are you keen on having a new robot co-worker?
• Fast Company. (2013). The Four Things People Can Still Do Better Than Computers. [online] Available at: https://www.fastcompany.com/3014448/the-four-things-people-can-still-do-better-than-computers [Accessed 14 Aug. 2017].
• McKinsey & Company. (2017). Where machines could replace humans--and where they can’t (yet). [online] Available at: http://www.mckinsey.com/business-functions/digital-mckinsey/our-insights/where-machines-could-replace-humans-and-where-they-cant-yet [Accessed 14 Aug. 2017].
• Simon, M. (2015). This Incredible Hospital Robot Is Saving Lives. Also, I Hate It. [online] WIRED. Available at: https://www.wired.com/2015/02/incredible-hospital-robot-saving-lives-also-hate/ [Accessed 14 Aug. 2017].